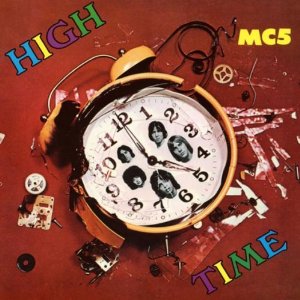 When it comes to the MC5 I’m always ready to testify about any of their albums. If someone asks me which one is my favorite it takes a lot less than 5 seconds of decision. Kick Out The Jams rules and Back In The USA is great, too but High Time is IT. Always has been, always will. The MC5 are a prime example of what happens when very talented individuals combine forces and record collections in order to break thru the terminal stasis of boredom, classification and mediocrity. This can only be achieved through thousands of hours in the practice room and on the stage. Tons of weeed helps, too.

The history of the MC5 has been written many times before so there’s no need for me to recap it again for you. (Does anyone know what ever happened to Ben Edmonds’ biography No Greater Noise that was supposed to come out almost TWENTY years ago?) By 1971 the MC5 had proven themselves as a major force to be reckoned with. Unfortunately, most people decided that their brand of mayhem was waaaay too much of a mellow harsher and they would rather not have the band spray their sweat all over them as they worked the stage. Ignoring the marketplace, the band created what was to be their final album High Time. Turns out it was creatively their most successful merger of pure Chuck Berry/Link Wray rock n roll, James Brown dynamics and the ferocious group improv of Sun Ra and the John Coltrane Quartet. Most bands can only attempt to move in one of those directions but the MC5 aimed high and went for a triple pronged attack.

Side one, song one - “Sister Anne” – BOOM! One of the greatest rock songs of all time. Starts off with a great, circular guitar riff and then the band comes crashing in with a monster boogie that makes the rest of your record collection seem kinda lightweight. At over 7 minutes, it never gets boring and you want it to keep going. Excellent lyrics written by guitarist Fred “Sonic” Smith delivered with a lot of heart and soul by vocalist Rob Tyner. Great guitar solos from Fred and fellow guiterrorist Wayne Kramer, a harmonica solo from Rob and even the Salvation Army marching band at the end. It’s such a shame that classic rock radio has ignored this song for so many years. What would happen if they played one less Meat Loaf or Bob Seger song once a week and played this instead? Would someone die? How much advertising revenue would they really lose? Their mistake means we just have to play it louder with the windows down so everyone else can hear it.

After that monolith comes the hyper boogie of “Baby Won’t Ya,” another winner written by Fred. On past MC5 albums all the band members shared songwriting credits equally but High Time is the first one with individuals noted. Fred dominates with four songs, half of the album and some of the best ones. The other Fred songs are "Over and Over” and "Skunk (Sonicly Speaking)." "Over and Over” deals with the frustration of war, society and inequality. Rob’s extremely pissed off vocals let you know he’s not fucking around. On the other hand, “Skunk” is pure rhythm and who knows what the lyrics are about. Fred wrote this one to show off the skills of Dennis Thompson, one of rock’s greatest drummers. “Skunk” starts off with Dennis pounding out a furious beat and is then joined by a bunch of others (including Seger) pounding on cans, bottles, cowbells, etc until Fred fires up another one of his classic riffs. Dennis has always said his two favorite drummers are Keith Moon and Elvin Jones and he makes that obvious here. His technique is incredible but he never sacrifices passion for it, and vice versa. Monster fucking drummer. Dennis’ partner in the rhythm section, bassist Mike Davis, is no slouch either although rumor has it he doesn’t play on all the songs here. Unfortunately, Mike had some drug problems that eventually got him kicked out of the band but he’s still alive and well. Very nice guy and I was fortunate enough to spend about an hour talking to him after one of the DKT/MC5 reunion shows in NYC back in 2005.

Dennis returns the favor and wrote “Gotta Keep Movin’” to show off Fred’s speedy guitar leads. Everything about this song is awesome. It contains some of the best belligerent “get out of my way” lyrics ever written, a violent groove and burning guitar playing. You will get a speeding ticket listening to this one in the car. Pure Motorhead music about 5 years before Motorhead existed.

"Future/Now" is the lone composition from Rob Tyner but it’s a killer, too. A great bass line starts it off then a killer drum fill cues the rest of the band in. Rob’s been described as the philosopher of the band and the lyrics bear that out – “the future's here right now if you're willing to pay the cost.” Turns out most of the hippies in the 1960’s weren’t willing to pay the cost, which is how we wound up with Richard Nixon as president and  Fleetwood Mac ruling the airwaves.

Brother Wayne Kramer contributes two songs. “Miss X” is a piano driven ballad that I’ve never much cared for but I’m not big on ballads to begin with. I was very happy to hear it turn up in an episode of HBO’s East Bound & Down, though. (Wayne works as musical director on the show). His other song is more my style, a full blooded rocker called “Poison” with some of his most blistering guitar work. He later did a great cover of this song with the Melvins on one of his solo albums.

After High Time the band unfortunately fell apart and was not able to realize its full potential. The MC5 should have been packing stadiums and blowing away the competition for many years after 1971. Like most pioneers, they took the arrows and paved the way for everyone from Aerosmith to the Ramones. The MC5 are often credited as a “pre-punk” or “proto-metal” band but the truth is they go way beyond either of those categories. Most punk bands never had a rhythm section as tight or could offer up the guitar fire power as the MC5, and only the Ramones delivered the triple Marshall stack attack on punk crowds. Metal bands took the volume and powertrip spectacle but made things too rehearsed and downright silly. At the end of the day the MC5 were, to quote Duke Ellington, “beyond category.” If you have a stereo with a volume knob, High Time better be in your collection.